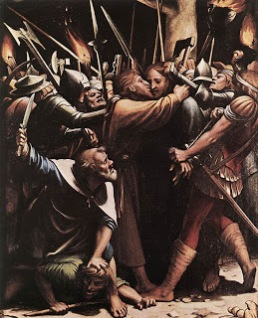 We’ve all experienced or witnessed betrayal at some point.  How do we feel when one close to us betrays us?   What would you do?

The best example of that in the Bible is Judas .  Chosen as one of the twelve, Judas was privileged. John 12:6 says that he was even granted the responsibility of maintaining the disciples’ money box. But that same verse reveals an important truth about Judas—he was a thief.

One of the reasons Judas Iscariot betrayed Jesus is because one of the chief priests “promised to give him money” (Mark 14:10-11). Those who were threatened by Jesus wanted him out of the way. We have to be on guard for those close to us that are doing something wrong that can affect us. The Devil’s messenger, is often an angel of light who looks like a minister of righteousness. People will do almost anything for money when it is their priority in life.

How did Judas become one of the 12 see the power and all these miracles and then apostatize? When someone’s heart is not right and you give them power it only amplifies what is wrong, not what is right (another example is Peter with Simon the sorcerer). We are also told that Judas did not let the word cleanse him (John 13:10;15:3). He did not abide in Jesus’ teachings, instead he was enticed by the authority to do miracles given to those who followed and his love for the money prevented him from being a servant. Amazingly, Judas was among them having the same results without their suspecting he was a devil who would eventually betray their Lord. Judas a perfect example of those claiming to do miracles in Christ’s name and where Jesus turns to them saying he never knew them (Mt.7:21). Meaning he did not have a relationship (a two way correspondence of love) with the Lord. Demons were subject to him like the rest of the apostles but again as in Mt.7:21 it does not mean that if one uses his name and sees the miraculous they are saved. What proves one is saved is repentance, a continual confession of their sin and reliance on the Lords strength and the fruit of the Holy Spirit present in their life.

Jesus knew beforehand He would be betrayed and who the betrayer would be. Long before it happened, even before it entered Judas’ heart to do so, Jesus called the traitor a devil, although not naming him explicitly (see Jn. 6:64,70-71). In Matthew 26:20, Jesus revealed to Judas that He knew what he intended to do. Knowing what a person will do, however, is not the same as causing him to do it. Therefore, Judas still had a choice and was not powerless in the matter.

First Peter 5:8 says the Devil is like a “roaring lion, seeking someone to devour.” And in Judas, Satan found a willing victim. If we’re honest with ourselves, each of us has a natural tendency toward sin.
Daily communion with God keeps hidden sins from becoming greater problems. Left unchecked, the “roaring lion” will also come after us, no matter what our  weakness may be. Ask the Lord to reveal any sins you need to confess. Deal with them today—don’t let sin lead you down the path of Judas.

Hello again everyone,
It’s been some time since this has been updated.  We moved again, back to our sea side home.  It is amazing sometimes where God leads!

Now that we have internet again, (it took some time to get hooked up again), so I do hope that I can get back to update more frequently.

Powered by WebRing. This site is a member of WebRing.
To browse visit Here.